Wondering what Mars Rover Percy is up to on the Red Planet?

After successfully creating oxygen on Mars and launching the first controlled flight on another planet, the high-achieving rover has now scored not just one, but two rock samples from the Red Planet!

It’s a historic moment for humankind as scientists are now one step closer to bringing the first set of samples from another planet back to Earth. We may finally be able to answer the age-old question: Is there life beyond planet Earth?

Earlier in August, the rover’s first attempt to collect a rock sample amounted to a crumbly pile. However, the NASA team persevered and figured out what went wrong – the ‘paver stones’, thought to be solid, turned out to be pretty powdery, and slipped out completely from the sampling tube. They haven’t given up on trying to sample those crumbly rocks though – Percy will be back for another attempt to conquer these brittle rocks!

So what’s so special about that rock?

Scientists love naming things. The NASA scientists named the first two samples ‘Montdenier’ and ‘Montagnac’, collected from a rock, also nicknamed ‘Rochette’. Just like most of Mars, the choice of those names remains a mystery.

After caching away the samples safely in its belly, Percy has already gained new insights into the region where it gathered the samples. 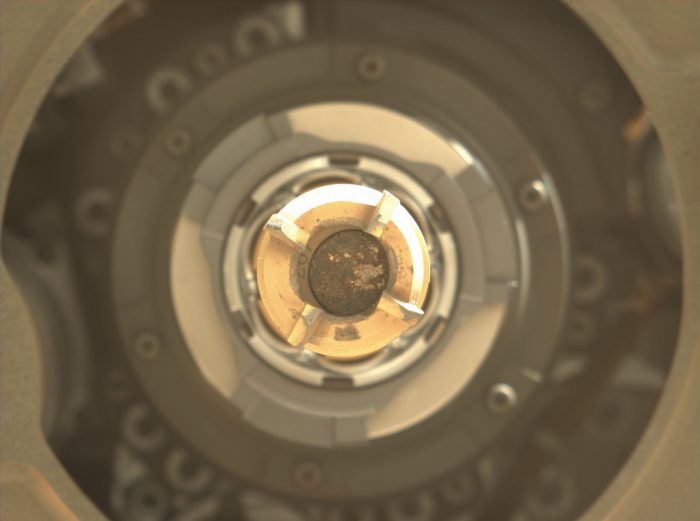 Perseverance’s first cored-rock sample of a Mars rock is seen inside its titanium container tube in this image taken by the rover’s Sampling and Caching System Camera. Photo credits: NASA/JPL-Caltech

NASA scientists were excited to learn from the rock samples that the Jezero Crater, where Percy landed in February 2021, might have had a habitable sustained environment.

The rock is basaltic and igneous in composition, indicating it might be the product of lava flows. Since the rock is volcanic, scientists could also accurately date its formation, allowing them to piece together the chronological puzzle of the most important events in the crater’s geological history. It’s mind-blowing that modern science allows us to decipher the formation of a crater on another planet almost 400 million kilometres away, just by analysing a tiny rock sample.

Scientists have also spied with their little eyes, something that’s salty and crystalline within the rocky samples. They speculate that salt crystals may have formed when groundwater flowed through and altered the original minerals in the rock, or more likely when liquid water evaporated, leaving the salts. What’s more exciting, tiny bubbles of ancient Martian water may be trapped in the rock cores, serving as microscopic time capsules that could reveal the ancient climate and habitability of the Red Planet. Bottled Martian water, anyone?

These samples could uncover many more Martian secrets once they’re returned to Earth for further analysis. To know whether water was present for tens of thousands (or millions) of years in the crater, or if water was there long enough for microscopic life to evolve, we’ll have to wait until Percy finishes sample collection so that NASA can initiate their Mars Sample Return missions. Read this article to find out how the ambitious return mission will work!

Like a determined sniffer dog at the airport, Percy will move on to another target, of course!

At a top speed of 0.152 kilometres per hour, it’ll steadily roll toward its next planned sample site, just 200 metres away in ‘South Séitah’. The region is a ridge plastered by sand dunes, boulders and rock shards that look like broken dinner plates.

Samples obtained from this region are likely to be much older than the first two, providing researchers with a better timeline to understand events that shaped the crater floor.

What will Percy unveil this time? Watch this space to find out!