If you’ve ever used a mirror to reflect sunlight onto a surface, you’ll notice that the surface will get slightly heated after a while, thanks to the transfer of heat by electromagnetic radiation.

Here we turn the Science Spotlight on CSP to see how this green technology is made possible. Watch out for the glare!

The working principle of CSP is simple yet elegant.

CSP technologies deploy a mirror configuration that concentrates the sun’s solar energy onto a receiver, converting sun rays to heat. The heat is then converted into steam to drive a turbine that produces electrical power.

Some CSP plants can also use thermal energy storage systems to store solar energy until it’s needed, or to solve intermittency issues, for instance when the sun is not shining. With this ability to store energy, CSP is considered to be a relatively flexible source of renewable energy.

Two of the most common applications of the technology are solar power towers and parabolic trough systems.

In solar power tower plants, a tall central tower is surrounded by thousands, or even tens of thousands of special flat reflectors called heliostats. Coupled with artificial intelligence technology, the special mirrors are capable of tracking the sun and adjusting their position to focus solar radiation towards the receiver of the tower.

The receiver collects the thermal energy in a storage medium — usually molten salt or water — and the heat from which drives a turbine to generate clean electricity.

While towers that use molten salt can reach up to 600 degrees Celsius (about 1110 degrees Fahrenheit), some companies such as Sandia use extremely fine sand-like particles that can absorb temperatures to over 1000 degrees Celsius (about 1800 degrees Fahrenheit). The ingenuity of using sand is that it incorporates energy storage — the particles remain stable at high temperatures and the heat can be stored for days, if not weeks. 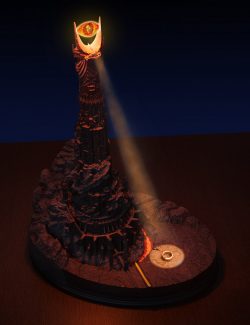 This allows CSP to produce electricity and patch up the intermittency of renewables such as solar photovoltaic and wind. Some of the largest solar tower power plants on Earth include the Ivanpah Solar Power Facility located in the Mojave Desert in California. With over a whopping 173,500 heliostats, the facility is capable of generating 392 megawatts, reducing carbon dioxide emissions by more than 400,000 tonnes annually.

Doesn’t this layout remind you of the Dark Tower in The Lord of the Rings, where the Eye of Sauron is located? But no worries, there’s no evil here!

On the other hand, parabolic trough systems concentrate solar energy using curved, trough-shaped reflectors. Instead of focusing solar energy onto a collector tower, the mirrors concentrate sun rays onto a receiver pipe. Inside the pipe flows thermal oil, which is heated and then immediately used to run an electricity-generating heat engine or be stored to generate power later when needed. 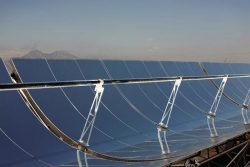 At the utility-scale, these systems are considered the most cost-effective among the CSP techniques. Some of the world’s largest parabolic trough facilities include the Ouarzazate Solar Power Station in Morocco. At 510 megawatts, it’s also the world’s largest CSP plant, saving over 690,000 tonnes of carbon dioxide emissions every year.

CSP has a couple of advantages such as providing a renewable energy source to complement intermittent renewables such as wind and solar photovoltaic power, and it also has the potential to be used as a transportable form of energy. For instance, CSP can be used to generate green hydrogen on-site, which can then be used as an energy carrier to power heavy transportation or other hard-to-abate industries.

However, this solar technology has its drawbacks. It’s not only critically dependent on location, it also requires a large area of land to operate, making it uneconomical in populated areas. This could severely limit the scale of deployment of CSP, restricting it only to remote land in sunny areas.

Compared to solar photovoltaic panels, CSP is only feasible at a large scale, meaning you won’t be able to install a CSP system on top of your roof. Due to the scale, the technology also comes with a hefty price tag, mostly due to its high construction and installation costs.

But CSP can be used in combination with other energy sources to create a more diverse energy mix. This could further secure grid electrification and help meet future energy demands as humanity works toward the overarching global imperative of a carbon-free economy.