A nuclear star is born.

Nuclear fusion reactions are what make stars, and our source of warmth, possible. Recreating these reactions on Earth sounds like something you’d only see in sci-fi movies – until now.

Check out a virtual tour of the reactor here.

Not to be confused with nuclear fission, fusion involves heating light atoms (e.g. hydrogen) to searing temperatures until it becomes a plasma (the fourth state of matter).

The plasma nuclei are then bottled up under high pressures and constantly smash into each other to form heavier nuclei, liberating lots of energy in the process.

The main challenge for fusion reactions is to keep the hot plasma confined long enough to produce utility-scale electricity.

The amount of compute required to optimise these experiments is dizzying. TAE used machine learning to develop an “Optometrist Algorithm” to design novel solutions to the highly complex problems regarding plasma behaviour.

Massive-scale simulations to expedite experimental research were made possible by leveraging the INCITE program’s exascale-level computing, with 750,000 node-hours on Argonne’s Theta supercomputer. 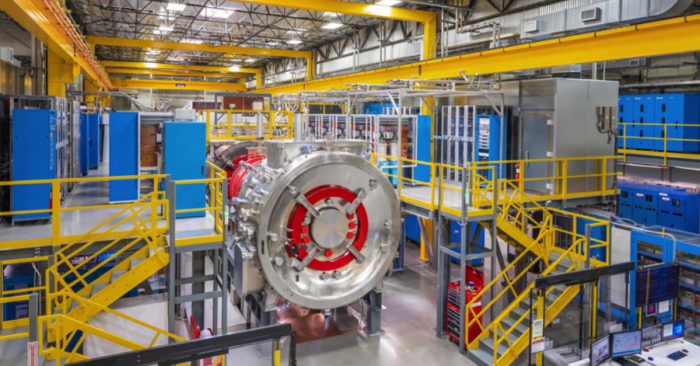 While achieving the significant breakthroughs in sustaining a stable plasma, Norman is still not hot enough to generate any sparks of electricity. The reactor uses all the energy it generates to maintain the reaction, leaving no net energy to power anything other than itself.

TAE has plans to scale to the conditions necessary for an economically viable demonstration facility by the end of this decade. The next-generation FRC reactor, called Copernicus, is designed to sustain twice the temperature of the Norman reactor. This will allow TAE to simulate net energy production, paving the way for its commercialisation.

Nuclear fusion is virtually a zero-carbon source of energy. The reaction produces zero carbon dioxide or any other harmful atmospheric emission. And the only fuels required are hydrogen isotopes and boron. It totally gets the climate green stamp.

Hydrogen-boron fuel is “the cleanest, most environmentally-friendly fuel source on Earth, with no harmful primary byproducts, and enough natural supply to sustain the planet for virtually 100,000 years”, says TAE Technologies CEO Michl Binderbauer.

It’s also fundamentally impossible for nuclear fusion reactors to cause nuclear accidents. Contrary to fission reactions, it doesn’t produce energy through chain reactions. Any minor shift in the working configuration of the fusion reactor triggers its total shutdown.

But if you find yourself wondering if this is too good to be true, your suspicions are not unfounded. Fusion might have its downsides, too.

Critics of the technology believe that it isn’t as ideal as its proponents paint it to be, citing four main issues: radiation damage to structures; radioactive waste; the need for biological shielding; and the potential for nuclear weapons proliferation.

Racing against the carbon clock.

But another challenge manifests – Can nuclear fusion be brought to life quick enough in the battle against climate change?

ITER, also a major nuclear fusion project, aims to achieve its first sustained plasma no earlier than 2025. And if it succeeds, it will be at least another decade before it can power electricity grids.

In the context of desperately needed sustainable energy alternatives, widespread deployment of fusion power might just miss the boat to make a profound impact. To be exact, there are just 24 years left until the amount of carbon dioxide released into the atmosphere causes a global warming of 2 degrees Celsius, the upper limit set by the Paris Agreement.

Though unclear if commercial fusion power could make it in time to combat climate change, perhaps it will be key to meeting the future power demand in the world, which will only double or even triple in decades to come.