Hydrogen is taking off. 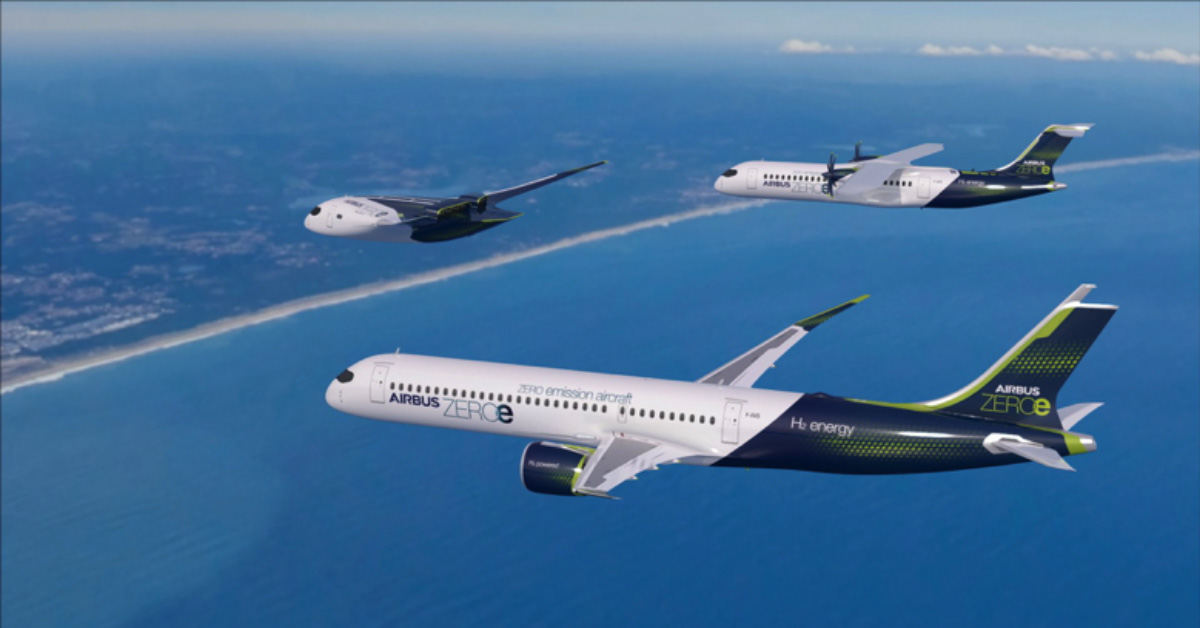 There is little argument that hydrogen is the fuel of the future.

While it can’t decarbonise our economy single handedly, hydrogen can play a crucial role in filling the gaps in energy-intensive industries where electrification is limited, such as steel, shipping, chemicals, and even aviation.

Yes, you heard that right – hydrogen will be taking to the skies!

The planes – powered completely by hydrogen – each represent a different approach to achieving zero-emission flight. They are envisaged as hydrogen hybrids – gas-turbine engines will burn liquid hydrogen as fuel and hydrogen fuel cells onboard will generate electricity.

Exploring various technology pathways and simulating aerodynamic configurations with high performance computing (and even quantum computing), Airbus aims to pave the way for the decarbonisation of the entire aviation industry.

The turbofan design aircraft is similar to the regular Airbus A320 in appearance and capacity. It’s capable of transcontinental flights, powered by a modified gas-turbine engine running on hydrogen, instead of jet fuel.

The smaller turboprop design is designed to be a regional aircraft, with distinct plane propellers. Just like the turbofan design, it has modified gas-turbine engines running on hydrogen, giving the small plane a travel range of more than 1,000 nautical miles, ideal for short-haul trips.

Perhaps the most striking design is the futuristic-looking “blended-wing body” design, which resembles the iconic American stealth aircraft, Lockheed F-117 Nighthawk. This design merges the wings with the main body of the plane, expanding its fuselage width to allow more options for hydrogen storage and distribution. It has a similar passenger capacity to the turbofan design, but its radical change in fuselage design opens up many possibilities for innovative cabins and extra features. 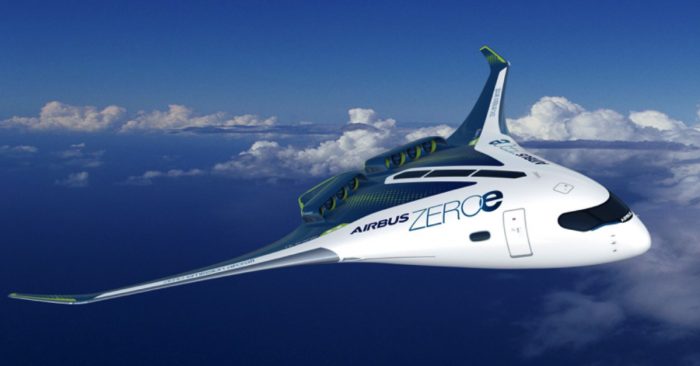 They’re basically investigating how an aircraft’s electrical propulsion system reacts when applied with the concept of superconductivity in super cold conditions, made possible with liquid hydrogen as a cold source.

Researchers can then determine the feasibility of this technology in optimising propulsion architecture for their ZEROe aircraft.

The benefits of a successful implementation are highly attractive. It will amplify the power density in the propulsion chain. It will significantly lower the mass of the distribution system. And it will decrease electrical loss and increase powertrain efficiency.

The end result? An ultra-efficient electric or hybrid-electric propulsion system for future aircraft. 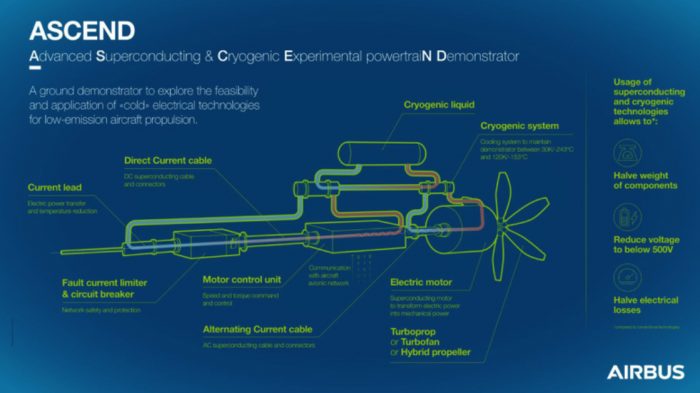 ASCEND infographic on how it works to apply cryogenic and superconducting technologies to enhance electrical propulsion. Photo credit: Airbus

Before the COVID-19 pandemic grounded most flights, commercial aviation represented roughly 2.5% of total CO2 emissions, more than those emitted by the whole of Germany.

Decarbonising the aviation sector is therefore one of the pivotal pathways to combat climate change.

As a consequence, hydrogen-powered aircraft may either have to carry fewer passengers or become much larger to accommodate the bigger fuel tanks. Airport infrastructures will need to adapt for hydrogen transportation and storage.

Critics also note that only 1% of hydrogen is actually “green”, produced via electrolysis using renewable power. A huge majority of hydrogen used today is manufactured from fossil fuel methane, releasing CO2 in the process.

Problems revolving around hydrogen are substantial, but not unsolvable. Plenty of research is underway to truly transform hydrogen into the fuel of the future.

So what do you think – do you see the future of aviation fuelled by hydrogen? It’s certainly fuel for thought!