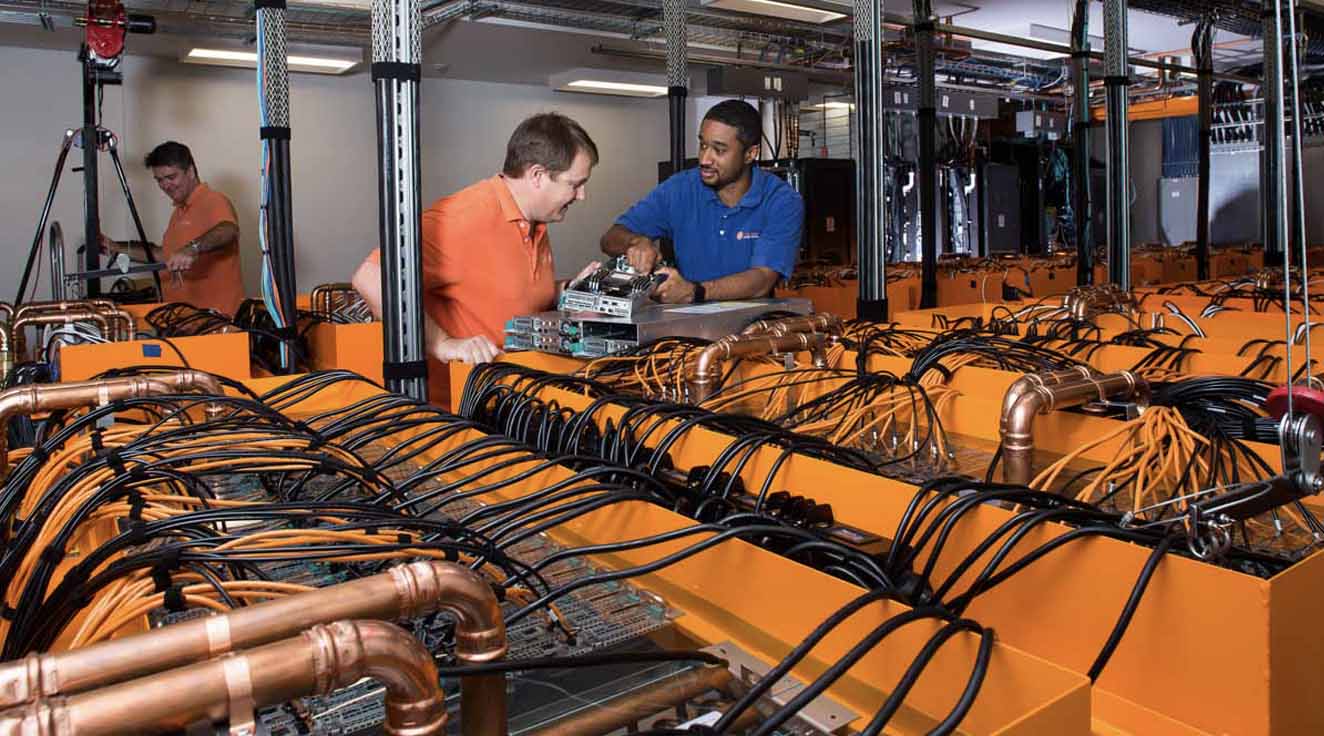 Australian company builds one of the world’s largest supercomputers.

To be at the top of your game in any sport, you need plenty of skill and lots of muscle.

In the seismic data processing industry, muscle comes in the form of compute power, and at DownUnder GeoSolutions (DUG) building muscle is high priority – as is honing the team’s skills to use it.

DUG is rolling out a series of muscle-building upgrades to its global seismic processing centres, including Perth, Kuala Lumpur, London and Houston; an expansion that will see its Intel-supported processing capability grow and likely exceed its competitors, based on petaflops (PF) per geo.

Details of its global expansion, and its progress, will be released as it becomes available during 2017.

The Intel® Xeon Phi™ processor-based super computer in DUG’s Houston centre was installed in 2014, with 6 PF of single-precision compute power – making it one of the largest in the world at the time. Collaborating with the leading global technology company Intel, the upgrade sees Bubba, as the computer is affectionately known, take an enormous leap forward in raw, rippling muscle – to 12 PF compute power. In addition, the ongoing computer room upgrade in Houston will enable Bubba to grow into a 120+ PF machine in 2018, as demand dictates.

DUG’s supercomputer in Perth, known as Bruce, is currently undergoing its own impressive expansion and London and Kuala Lumpur are next to be upgraded, coinciding with brand new offices and data centres currently being established in those regions.

All these computers utilise the flexibility and power of the new bootable Intel Xeon Phi processor 7210 (formerly codenamed Knights Landing), and will be upgraded to the next generation (codenamed Knights Mill) as soon as it becomes available. All of DUG’s processing and imaging codes are running on the new processors, and are proving to be up to three times faster than the prior generation Intel Xeon Phi processors. Combining the Intel Xeon Phi processor with DUG’s proprietary, immersive oil-cooling technology has enabled a significant reduction of the computer footprint and a massive 40% reduction in power consumption – making it the greenest installation on Earth (Power usage effectiveness (PUE) ~1.045).

It’s a remarkably significant investment, bucking the trend, as DUG operates in an industry that hasn’t seen a lot of growth in recent years. As a matter of fact, right across the global oil and gas sector, it’s been a story of lower prices, slashing costs and cutting staff – the heart of any company.

“We saw this as the time to step up and be noticed – by continuing to hire the best people, investing heavily in R&D, expanding our skill set and developing a massive expansion plan for our global processing centres,” said Lamont.

“DUG came to Intel during the oil industry’s dark days to help build one of the largest supercomputers in the world,” said Charles Wuischpard, Vice President of Rack Scale Design Solutions at Intel. “This machine will support the cost-effective, large-scale use of emerging seismic codes, such as Full Waveform Inversion, while also supporting established applications and codes. This is a long-term relationship that is about not just technology, but also deep collaboration and the use of new business models that will help enable more cost effective energy exploration for the entire industry.”

By the time the oil price had dropped below US$50 per barrel, thousands of skilled workers had been laid off and the industry appeared to be in free-fall. Naturally, in this environment, oil companies were looking to save money.

This saw the tables turn, such that the cost of projects plays a larger role, alongside technology, service and time frames, in contractor choice.

“As acquisition prices fell, the size of datasets grew considerably and this played to our strengths,” Lamont added. “We run a lean company and with Intel’s support and next-generation technology, which our high-performance algorithms fully utilise, we’re expanding our processing capability to a whole new level. Our combination of extensive technology, service and value for money is extremely compelling.

*Intel and Xeon Phi are trademarks or registered trademarks of Intel Corporation in the United States and other countries.