It’s finally the weekend. But to your horror, you realise you might spend all day ferrying your three kids around town before you get a chance to unwind after a hectic work week.

“Do I first take Henry to his soccer practice, then Jane to her guitar lessons, then head home to pick up Maddy for her dental check-up, then swing across town to collect Henry after his practice and take him to grandma’s? Or do I pick up Henry first and then Maddy along the way?”

“Oh no…taking that route means I might encounter road works…I wonder if that’s completed? I wonder what would Route 16’s traffic be like on a Saturday? I wonder…”

Argh! The utmost frustration strikes. You find yourself racking your brain to plan the most efficient way to drive your kids around and make it home in time to enjoy that glass of evening wine.

At this moment you wished you had the superpower to split yourself up and test out all possible routes yourself to decide which is the best.

Resigned, you realise this isn’t biologically and physically possible, and you fend off your fantasies and pick the route you took last week.

This is completely different in the field of quantum physics though. In that realm, the laws of classical physics cease to exist.

The same concept just described? That an object can exist in multiple states at the same time, in different proportions? It’s actually called quantum superposition.

You can learn more about the fundamentals of superposition in this brilliant video here, or if you prefer a good read on the subject, this article gives a simple digestible explanation of the theory.

Now, how is this concept applicable in real world scenarios?

Imagine you’re asked to seat fussy customers at the same table in a restaurant. But there is only one optimal seating arrangement out of all the different possible combinations. How many different possibilities would you have to explore to find the optimal and how long would that take?

If there were only 2 customers, you’ll have 2 different combinations. Easy peasy. 5 customers? You’ll need to churn up 120 different combos. Still…manageable. But if you had 10 customers, there’ll be a whopping 3.6 million possibilities (a factorial of 10)! And that’s just 10 people!

To further complicate things, real-world scenarios will also likely include times when seats are more than people, or vice versa, or that customers may come and go throughout the evening, with new customers replacing those leaving, and many many more.

We’ve been relying on supercomputers for most problems, but they aren’t that super at solving certain types of difficulties, some of which may seem straightforward at first glance.

Behold! Here’s where the quantum computer comes into play.

Quantum computing harnesses the phenomena of quantum mechanics to deliver a huge leap forward in computation to solve some particularly tough issues. 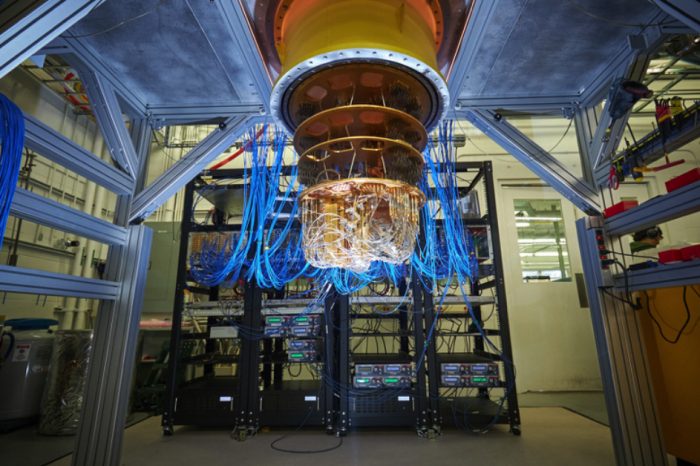 While supercomputers have to compute and analyse each combination one after another, the principle of quantum superposition allows quantum computers to process all the possible solutions at once. This speeds up and enhances the problem-solving process, saving you lots of valuable time.

Researchers at The Quantum Information, Simulation and Algorithms Research Hub (QUISA) hosted at The University of Western Australia (UWA) have been doing lots of cool quantum research. Led by Professor Jingbo Wang, physicists at UWA have shown that quantum computers may be used to solve certain classically unsolvable problems.

As an example, they applied the Quantum Walk Optimisation Algorithm (QWOA) to solve a vehicle routing problem (VRP), whereby customers of known demands are supplied by one or several depots with the objective of minimising total route cost. Many industries could benefit from solving these problems via the quantum route. As today’s logistics and supply chain systems become increasingly complex, companies would want to know the optimal route to save on fuel costs and optimise profits. The advent of self-driving cars will also need to depend on the application of quantum computing to manage their vehicle traffic, which will be a stretch for traditional computers to handle. In the financial sector, portfolio rebalancing and optimisation could also benefit from quantum computers.

Major quantum powerhouses are already in the race towards that finish line.

Will 2023 be a year that’ll revolutionise the world of computing? Or is Google’s 2029 release more realistic?

We can’t wait to see how that unfolds.

To put that into perspective, a 300-qubit quantum computer has more computing power than ALL the supercomputers on earth combined. With every qubit you add, you double the computing power.

While it’s a transformative piece of technology capable of supercharging our data processing abilities in myriad sectors, the advancement of quantum computing will also bring about potentially serious downsides.

Security, for instance, would be gravely challenged.

It’s fair to say that quantum ethics, like the technology itself, is still at an early stage of implementation. The work and actions taken on quantum ethics will need to progress far and fast if it is to be effective and convincing.

Quantum computing’s impact on cyberprivacy and cybersecurity will no doubt be challenging.

But what quantum computers break, count on quantum encryption to fix.

Main picture: A look into IBM’s 53-qubit quantum computer, with a dilution refrigerator made of real gold to cool the quantum chips. Photo credit: Stephen Shankland/CNET