The billionaire space race takes off. 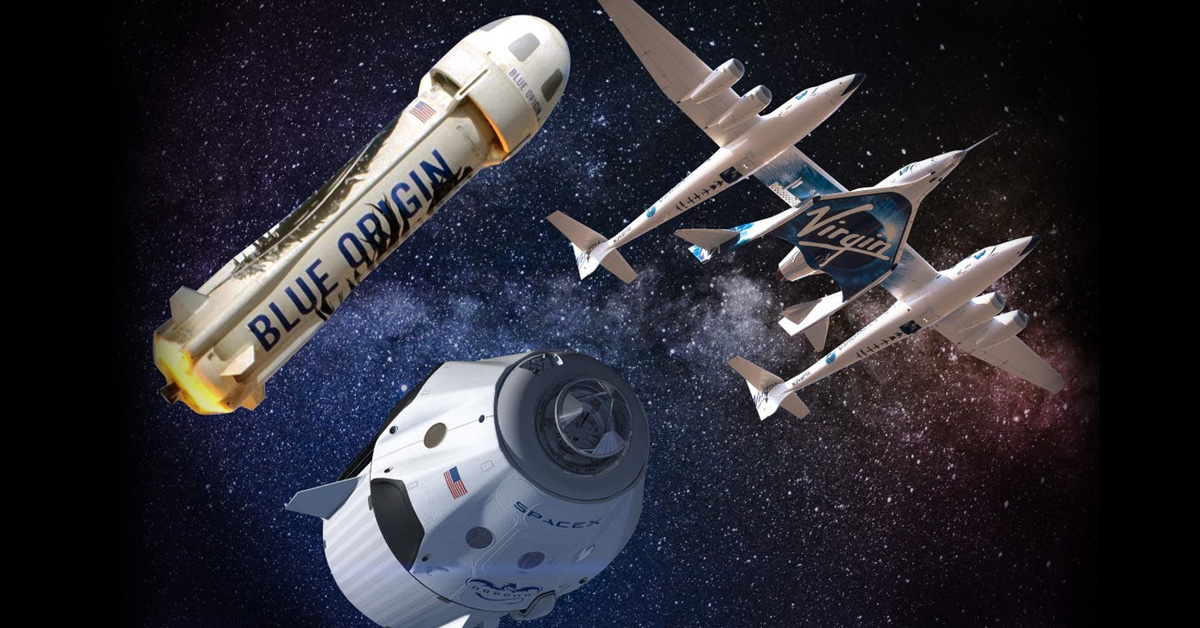 Check ignition and may God’s love be with you.

Sir Richard Branson, the founder of Virgin Galactic (a sub-orbital space tourism subsidiary of Virgin Group), was a bit of a space oddity himself on Sunday July 11 when he became the first billionaire to travel to space aboard a spacecraft he funded. It was Virgin Galactic’s first fully crewed spaceflight carrying two pilots and four crew members, including Branson himself. Catch the historic moment here!

Here’s a little science fun fact: A NASA-supported plant experiment hitched a ride on the spacecraft, which will study how plants change their gene expression during a few minutes of microgravity!

But what made a splash across headlines was the fact that the Virgin Galactic flight beat Blue Origin, another private aerospace manufacturer founded by Amazon’s Jeff Bezos. Both were vying for the title of ‘first commercial spaceflight’ to mark the dawn of space tourism, an industry slated to be a multi-billion dollar market in the next few years.

The tension surrounding this tweet by Blue Origin is so thick that you can slice it with a knife! In the tweet, Blue Origin was being all sorts of shady by insinuating that Virgin’s spaceflight was technically not a spaceflight as their spacecraft apogee was about 14 km (8.7 miles) shy of reaching the Kármán Line, a boundary recognised by some organisations to differentiate between Earth’s atmosphere and outer space.

Rivalry aside, it’s still a tremendous accomplishment by Virgin Galactic. Let’s dive into the differing technological philosophies of the space capsule and spaceplane used by Blue Origin and Virgin Galactic, respectively, to launch paying customers on short space shots.

Perhaps one of the most distinctive differences between the two spacecraft is the way they’re launched into space.

Virgin’s spacecraft, SpaceShipTwo, is air-launched akin to a parasite aircraft – it takes off from the runway carried by its mothership, WhiteKnightTwo, between its fuselages. Upon reaching an altitude of about 15 km (49,000 ft), SpaceShipTwo separates from its mothership, initiates its rocket engines, reaches supersonic speed, and coasts to its peak altitude of 86 km (53 miles). 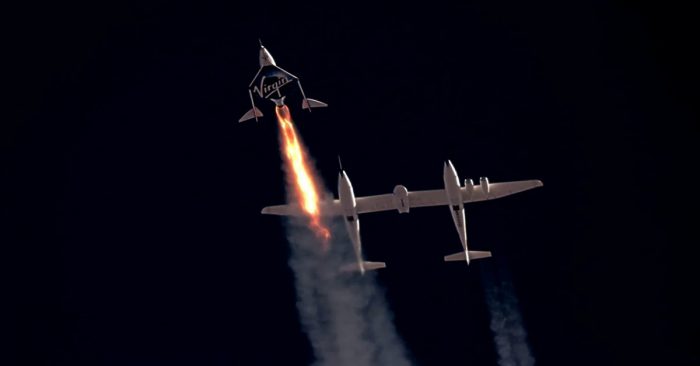 SpaceShipTwo blasting into space as it detatchs from its mothership, WhiteKnightTwo. Photo credits: Virgin Galactic via REUTERS.

Blue Origin’s spacecraft, New Shepard, is launched similarly to how you’d imagine rockets are launched – consisting of a propulsion module fitted with a crew capsule. At an altitude of about 40 km (131,000 ft), the booster separates and the capsule soars upward to its peak altitude of 100 km (62 miles), propelled by pure momentum generated from the booster. 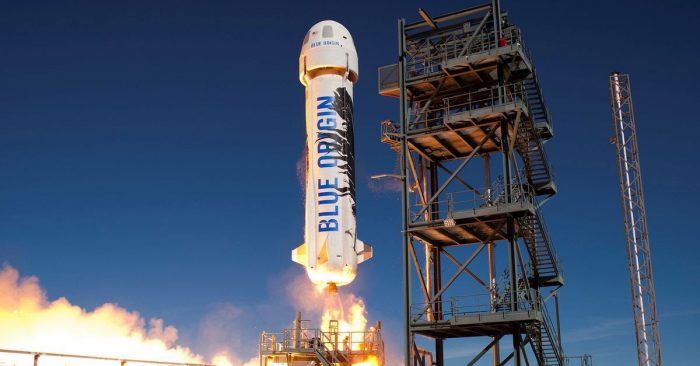 New Shepard blasting off into space in a test run, with the rocket booster (bottom) and the crew capsule (top) intact. Photo credits: Blue Origin

When the spacecraft reach their apogee, passengers will begin to experience weightlessness for around four minutes. For these few short moments they can drift from one window to another, bask in an incredible once-in-a-lifetime experience, and view our planet from one side of the spaceship and the abyssal darkness of space on the other.

With different launch techniques, the methods for the spacecraft returning to Earth are bound to vary too.

SpaceShipTwo might resemble a standard aeroplane, but don’t let that fool you. Its shape-shifting capabilities could give The Transformers a run for their money. During descent, it changes its shape in space by rotating its wings and tail booms upwards. This ‘feathered’ design, inspired by a badminton shuttlecock, ensures its rate of deceleration is well-controlled by aerodynamic forces, giving it maximum stability during its re-entry into the Earth’s atmosphere. Once the vehicle is close to Earth’s surface, it reverts to its original form and glides back onto the runway for a relatively standard landing.

After separation, New Shepard’s reusable booster will deploy fins to steer itself during descent. The engines will be restarted to allow it to have a powered landing, (throttled down to below 20 % of maximum thrust), and a vertical touchdown much gentler than that of SpaceX’s Falcon 9 booster. Meanwhile, upon re-entry, its crewed capsule will deploy three huge parachutes and ignite retro thrusters to create a soft and safe landing for its passengers.

SpaceShipTwo is fitted with a hybrid rocket engine called the RocketMotorTwo, which uses a rubber-based solid rocket fuel (HTPB) and liquid nitrous oxide as the oxidiser. This configuration combines the simplicity of a solid motor with the controllability of liquid fuel. While its rocket can be shut down rapidly at any point during the flight, it can’t be throttled. Because it launches mid-air, the spacecraft has a short burn time of 60 seconds and produces thrust at 310 kN with a specific impulse of 250 seconds, which is an indicator of how efficiently the engine generates thrust.

New Shepard is equipped with a propulsion module, powered by the Blue Origin BE-3 bipropellant rocket engine, burning both liquid hydrogen and liquid oxygen. While it has a longer burn time of 140 seconds as it launches on the ground, the engine produces 58% (490 kN) more thrust compared to Virgin Galactic’s at a much higher specific impulse of 310 seconds.

Another interesting aspect of Virgin’s sub-orbital spaceflight is that humans are in total control of the spacecraft. The pair of pilots in the cockpit can control the plane via electronic trims when it’s flying at supersonic speeds, and via cable and rod linkages at subsonic speeds. Twelve cold gas thrusters, operated using compressed air, control the orientation of the plane effectively when there is no atmosphere present. The presence of human controllers would make the flight seem safer as they could provide rapid solutions during emergencies.

Unlike SpaceShipTwo, New Shepard is completely autonomous, allowing all six seats on board to be occupied by passengers. It’s flown successfully 15 times before, has a good test flight record and features an emergency system that can jettison the passenger capsule away from a failing booster. If parachutes fail to deploy, the booster engines and a crushable ‘bumper’ section at the belly of the capsule could still help it land safely. Nonetheless, this fully-automated launch system is relatively new and many things could go awry with small errors across all sorts of hardware and software. It’s rocket science, after all.

Space was once the elusive preserve of governments. Soon it might turn into a rich person’s playground – a ticket for Blue Origin’s first spaceflight was recently auctioned for $28 million!

Those who attack space,

for so many people.

Let’s hope that the intense competition between space companies won’t overshadow the genuine and humbling purpose of humankind’s venture into space – to know the unknown. 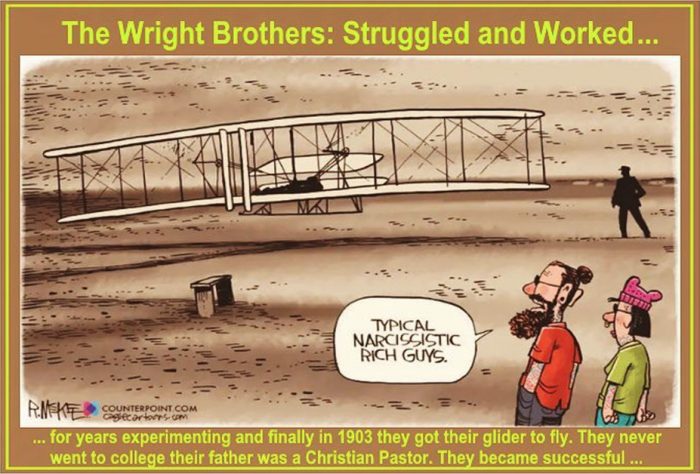