Remember those diagrams in science books showing the internal geological structure of planets, consisting of crusts, mantles and cores?

Well, Earth is the only planet whose structure scientists fully understand in detail, while the structures of other planets are actually just educated guesses! Scientists determine the inner workings of our planet by piecing together data from seismology measurements, which is something not available for other planets, until recently.

NASA’s InSight (Interior Exploration using Seismic Investigations, Geodesy and Heat Transport) lander, designed to give the Red Planet its first-ever thorough checkup since its formation 4.5 billion years ago, just delivered pioneering in-depth studies of Mars’ “inner space” since its touchdown on Mars in 2018. Published in Science, the trinity of papers describe the planet’s crust, mantle and core, giving humanity the first insight into another planet of our solar system.

At its landing site on Elysium Planitia, the stationary probe has been studying Mars by measuring its temperature and marsquake (basically Mars’ version of earthquakes) activity using a suite of scientific instruments.

With plenty of seismometer data, NASA researchers are able to ascertain the thickness and structure of Mars’ crust, the temperature of its mantle and confirm the seismology of its core. 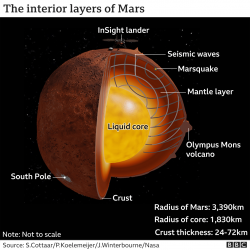 By analysing two types of seismic waves generated during marsquakes – rapid and compressional P-waves and slower and transverse S-waves – the researchers can deduce the potential structure and thickness of the crust.

As P-waves pass through a physical boundary – such as from the mantle to the crust – some of the P-waves are converted into S-waves. Measuring the difference in timing of those two waves enables researchers to estimate how thick the crust is. We now understand the crust to be between 24 km to 72 km. This is much more accurate than previous models that put the crust at around 100 km thick. 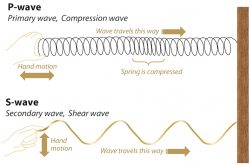 Illustration of how P waves and S waves are fundamentally different. Photo credits: University of Saskatchewan

To determine the condition of the mantle, researchers created and tested different models of the Martian crust and mantle. They identified eight low-frequency marsquakes that generated both direct (P- and S-waves) and reflected waves and fed the data to the models. How far these waves travel is governed by the structure of the lithosphere (crust and mantle) and the distance from the marsquakes to the seismometer. Scientists can then use this information to make highly accurate predictions about the properties of the mantle.

Comparing the data and the models, researchers found that Mars’ lithosphere is between 400 km and 600 km thick. It’s much thicker than any rigid layer here on Earth, which leads us to assume that the Martian crust has roughly 13 – 20 times more heat-producing radioactive elements than the mantle.

Knowing the size of Mars’ core requires studying the slow-moving S-waves that bounce off the interface between the core and the mantle. Assessing seismic signals from six marsquakes close to InSight, researchers were able to estimate the size of the liquid core, which is a whopping 1380 km – more than half of the planet’s radius!

Researchers also determined the density of the liquid core, found to be 5.7 to 6.3 grams per cubic centimetre. For comparison, the density of Earth’s core is roughly 9.9 – 12.2 grams per cubic centimetre. The larger and less dense core implies that a relatively large quantity of lighter elements must be mixed with its iron. While scientists already know that the core contains a large amount of sulphur, which keeps the hot and pressured core liquefied, they can now further understand why, unlike Earth, Mars has no magnetic field.

Peeling away the layers of Mars.

It also prepares us for manned missions to the Red Planet in the near future. While marsquakes, which are much milder than earthquakes, are of little concern to astronauts, the lack of a magnetic field as a result of Mars’ sulphur-rich core means that the astronauts’ protection and equipment must be designed to be highly resistant to damaging solar winds.